This morning I attended a breakfast presentation for Women’s Empowerment Day at the Center for Civil and Human Rights. During the presentation, a panel of notable women spoke on the state of women’s issues locally, nationally and globally. While I didn’t agree with everything they said, it was clear that we all still have a lot of work to do.

Two things became forefront issues as the discussion continued: violence against women and the debate over how much control women have over their own bodies. It’s true that most people can agree that violence against women is a bad thing. We tend to form an overall consensus there. Yet, it’s still a huge problem. The latter, I realize, is a hot-button topic for politicians and us Christians alike. It’s not my desire to head down that rabbit hole right now, though. Instead, I think we can tie it back to the first, and agree that women should be protected from being forced into something they don’t want to do. 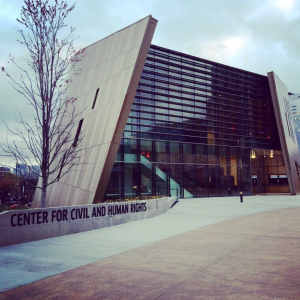 I also learned two very startling facts. The first is that Georgia has the fifth highest rate in the US of women being killed by a domestic partner. The second is that the average age for a human trafficking victim in Georgia is 12 years old. These statistics should shock you, and I hope move to you action.

Issues like these can seem overwhelming. And you may not personally know anyone affected by them, therefore, you are unsure how you can help. But I assure you, you can create change.

In fact, here are six actions you can take immediately:

Clearly, these issues and suggestions are just starters. They are just the beginning of a dialogue I hope you will continue.

As my friend Stephanie and I walked around the Center afterwards, we landed in the Civil Rights area. It brings me to tears just standing in that room. We started talking about what we’d heard that morning, and what we were seeing in front of us, and how it was all still so unbelievable.

I told her that human rights and trafficking were our mantel to take up. They are our Civil Rights movement. I told her that if I’d lived during the 50’s and 60’s, I hope I would’ve had the guts to be a part of demonstrations and freedom rides. And I also told her that I hoped one day the displays would show how we eradicated such injustices.

Both times I’ve been to the Center I’ve stared at the older people who walk through the displays. I wonder what they’re thinking. Do they look at those walls with pride because they did something, even in their own small way, to bring about change? Do they feel shame because they did nothing and accepted racial inequality as part of the culture? Or are they just glad someone else did the work? I don’t know.

But one thing I do know is that if those displays are ever erected that tout trafficking and human rights injustices as part of our history and not our present, I want to be able to walk my friends and family through with my head held high, knowing that I helped make them a reality.

I will be the change I want to see in this world.

Won’t you join me?

“The only thing necessary for the triumph of evil is for good men to do nothing.” – Edmund Burke